Deprecated function: The each() function is deprecated. This message will be suppressed on further calls in menu_set_active_trail() (line 2405 of /home/hulijedw/public_html/includes/menu.inc).

Does Student Debt Affect the Probability of Homeownership?

Reports of low homeownership among recent graduates has prompted many to blame student loan debt, considering Americans owe a collective $1.2 trillion in student loans. The common belief is that student debt prevents recent graduates from saving a down payment and the repayment of costly student loans causes them to miss payments and ruin their credit scores, making them unsuitable candidates for mortgages.

While these factors can influence homeownership, the narrative that student debt prevents homeownership is more myth than fact.

Student debt actually has a negligible impact on your likelihood of owning a home if you obtain at least a bachelor’s degree. Four-year degree holders who graduate with no student loans have a 70 percent probability of homeownership. Comparatively, if you graduate with a four-year degree and $50,000 of student loans, your likelihood of homeownership is still 66 percent, a measly 4 percent drop.

The same trend holds true for married couples—if at least one spouse obtains a bachelor’s degree with no student debt their probability of owning a home is 69.8 percent. That probability decreases by a mere 2.1 percent if they carry $30,000 of collective student debt. Undergraduate loans have a minimal effect on your chances of owning a home, as long as you get a diploma. 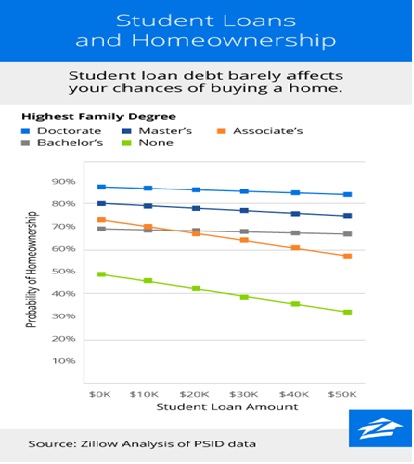 Advanced degree holders are overall more likely to buy a home and even less impacted by their student debt. Obtaining a masters, medical, law or decorate degree actually protects you from the negative impact of student debt when you’re ready to buy a home.

The overall probability of homeownership is highest for individuals with graduate degrees. At the master’s degree level your likelihood of owning a home is 80 percent if you have no student loans. Add in $50,000 of student debt for that master’s and your likelihood is still 75 percent. Doctorate degree holders drop from an 87 percent probability to a still staggeringly high 84 percent if they graduate with $50,000 of loan debt.

Those with no degree fare even worse. The chances of homeownership start at 48 percent for someone with no degree and no debt but can decline as low as 33 percent if you have $50,000 of student loans and an incomplete degree.

While the outlook for homeownership in spite of student loan debt is generally positive, understanding your personal financial situation is key to purchasing a home. You should calculate your housing budget and see if your debt-to-income ratio would meet a lender’s qualifications for a home loan. Having a clear picture of your finances can help you determine whether to launch the shopping process or delay the purchase for a few years.

Keep up to date with the latest news and developments in real estate.